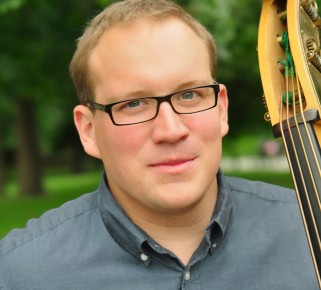 “After 10 years of flying under the radar on the New York jazz scene, bassist Michael Oien has emerged as a leader, prodigious composer and potent improviser on his long overdue debut, And Now.”  –Bill Milkowski

“An exceptional bassist with a large tone and an advanced style…an impressive debut for Michael Oien, both as a bassist and as a composer.”  -Scott Yanow

Ever since he graduated from Berklee in 2004, bassist Michael Oien has been an important part of the New York jazz scene, appearing on a countless number of dates as a sideman. Recently he recorded his debut as a leader, the consistently creative And Now for Fresh Sound’s New Talent label. “This is my most important artistic statement so far,” says Michael, “writing my own music and recording it with my own band.”

And Now has Michael Oien utilizing some of his favorite musicians. “In sidemen, I look for players with individual sounds who are flexible, and musicians who concentrate less on the technical aspects of their instruments and more on expressing themselves in the music.” The CD features six of Michael’s post bop originals performed by a quintet that also includes altoist Nick Videen (“A great all-around musician with a huge sound”), guitarist Matthew Stevens, pianist Jamie Reynolds and drummer Eric Doob. The music, which includes such inventive pieces as the picturesque “In The Early Autumn,” the exhilarating “Mad To Live,” the quietly passionate “Smile This Mile” and the three-part “Dreamer,” is forward-looking and adventurous while also being accessible and swinging.

Michael Oien was born in Silver Spring, Maryland, growing up in Ashland, Wisconsin. He played several instruments as a youth including the guitar and piano. While he was a guitarist in rock bands as a teenager, he began to focus more on the bass when he was in middle school, playing with the school orchestra. “While growing up, I listened to everything…Ray Charles, The Beach Boys, Chuck Berry…a lot of rock and roll. My parents listened to jazz and there was always music playing in our house. When I was around 12, the school orchestra teacher took all of the bass players down to Madison, Wisconsin for a workshop with Richard Davis which made a big impact on me.”

He was a jazz studies major during two years at the University of Minnesota before transferring to Berklee in Boston. “There was a great deal going on at Berklee and I had the opportunity to play with so many talented musicians.” After graduating and moving to New York, Michael worked at quite a few festivals including the New York City Winter Jazzfest, the Beantown Jazz Festival in Boston, the Kobe Jazz Festival in Japan, Nancy Jazz Pulsations in France, and events in Belgium, Switzerland, Germany and Costa Rica. He toured with pianist Michel Reis from Luxembourg (with whom he recorded), recorded with drummer Yotam Rosenbaum (Balance which also features vibraphonist Dave Samuels, violinist Mads Tolling, and pianist Vadim Neselovsky), and performed with altoists Uri Gurvich and Darius Jones, trumpeters Christian Scott and Igmar Thomas, trombonist Hal Crook, guitarists Mick Goodrick, Nir Felder and Bryan Baker, and pianists Leo Genovese and Roy Assaf.

In recent times, Michael Oien has mostly been working as a leader including at Matthew Garrison’s ShapeShifter Lab and at Sycamore in Brooklyn. “I have been in New York for nine years and this is something that I have always wanted to do, performing original music rather than just playing standards. Now that the record is completed, I’d love to tour with the group, and then take it from there.”